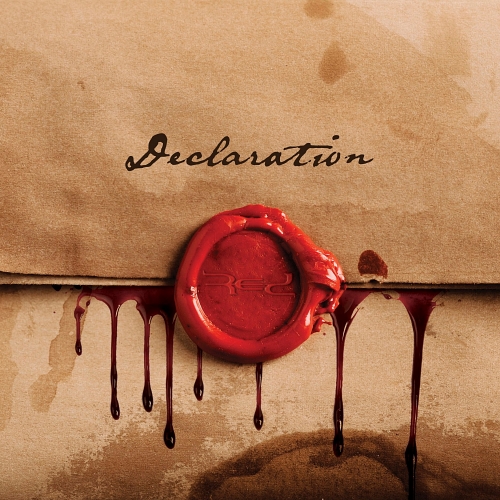 Headbangers get ready; RED’s new album Declaration means business.  If your go-to genre is rock or metal, this album will no doubt whet your whistle for that hard-core sound that is sometimes difficult to find in Christian music.  While most of their former albums had a few in-your-face rock songs, they were padded between more subtle, expressive tunes.  However, this seventh studio album is full of adrenaline-induced instrumentation and a storm of haunting vocals and resonating, from-the-gut screams.

But, where did this aggressive album come from?  In 2018, the band parted ways with labels and started their own – RED Entertainment.  The freedom of this change is exposed within the ten tracks on Declaration; as singer Michael Barnes reveals, “It is purely us, something we did entirely on our own. There is a lot of raw energy and unfiltered emotion.”  Guitarist Anthony Armstrong adds, “The album is a culmination of all that we’ve seen and learned, everyone we’ve met and connected with over the past 15 years. All these experiences shaped our approach to making the statement that is this album.”

The album kicks off with “All for You”, which displays the recognizably-RED electrifying guitars, erupting drumbeats and Barnes’ monstrous vocals and screams.  “Infidel”, a personal album favorite, eases in with a few seconds of haunting sounds before the thunderous, heavy music accompanied by Barnes’ raw scream cutting in, making this a song a must-see at a live performance.  “Cauterize” carries on the torch of explosive drums, dynamic guitars and perfectly orchestrated vocals that rip through the listener’s ears.

Next up is “The War We Made” which takes it down a notch with its beautiful melodies and raw, sincere lyrics.  “The Evening Hate”, another favorite, and “Float”, slide back in with those savage guitars and an assault of drums.  The bridge in “The Evening Hate” falls in dramatically; so thick you could cut it with a knife.  Barnes’ vocals in both songs are still powerful as ever, crossing back and forth between harmonious singing and frantic screams.

“The Victim”, and their first single of the album “Sever”, keep the pace going.  “Sever” does slow it down but just a pinch, giving the listener a quick breath before “Only Fight” comes in.  “Only Fight” stands out as slightly different, at times Foo Fighters-esque and definitely another favorite.  The finality of the album “From the Ashes”, is a song a bit reminiscent of their older songs, but still remains bold and delicious in its own way.

In closing, Declaration, offers such emotion and honesty in both its music and lyrics, earning a well-deserved top notch in their fifteen years of music.  With the high energy level and boldly honest lyrics, I think that most listeners will be able to relate to something here, especially during these troubling times, leaving Declaration on repeat and atop many playlists.