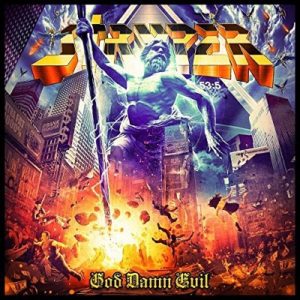 STRYPER has for over three decades been synonymous with the words “Christian rock” and “Christian metal”. Laugh if you will, but bands like STRYPER, Petra and Whitecross really did, in my opinion, lay the foundations of what would become the later influx of Christian rock bands that you see today. I believe that bands like Skillet, Thousand Foot Krutch, RED and many others owe their acceptance into the music scene now to bands like STRYPER who had to literally fight to prove that there was indeed a place for Christian rock. Thirty-four years later, the band is still going as strong as ever and entering 2018, there are no signs of slowing down one bit.

For those who have listened to our radio show Kingdom Builder, know that STRYPER’s Michael Sweet has been a guest on our show more than any other one person. This last time around I even joked with Michael that between STRYPER, his solo records and Sweet & Lynch, he has been a part of 7 recordings in the past six years. That’s unprecedented at any level of music, yet the nearly 55-year-old rocker has been responsible for more records in the past six years than musical counterparts half his age. It’s incredible and a true testament to the dedication he and the guys of STRYPER have when it comes to recording music.

With the announcement of the band’s new record God Damn Evil this past February, there was a lot of talk (both negative and positive) about the record title and the way it came across. I don’t think a record title from the band has ever been met with so much talk and controversy since their 1986 release of To Hell With The Devil, and though the new record’s title is a bit bold, we now know just how impactful that preceding record went on to be.  So upon the release of God Damn Evil, will the band have just as much impact when fans finally hear it? I think so and here’s why…

First off, I had the opportunity to talk with Michael about the album title and even listen to the title track way ahead of the release and in Michael’s own words, the title and title track were never meant to be blasphemous, disrespectful, cursing or even using the Lord’s name in vain, but rather a passionate and bold plea in prayer to the Lord to damn the evil that has seemingly overtaken the world we live in. Michael Sweet had this to say when I asked him about the record’s title…

“2017, we started working on the new album and everybody agreed that it would be a good time to use and have a title like this. It’s a very powerful statement, very bold statement, and people get caught up. It’s meant to make people think. It’s not meant to be shocking, or controversial believe it or not. It’s meant to make people think, talk and debate… It is meant for us to be a prayer, asking God to damn evil. It’s not a swear, it’s not us trying to be blasphemous, not us trying to be funny, it’s not us taking the Lord’s name in vain. It’s none of that. And some people think that it is and it’s not at all. It’s a simple phrase, a powerful statement. God. Damn. Evil.” Sweet continued “We live in a world where we see evil at new levels almost daily and things we thought we would never see in our lifetime and we’re seeing them. I mean the Las Vegas shooting for example. I certainly never thought I would see anything like that in my lifetime. I’ve never even thought about it. Never even crossed my mind. And you see it on the news and you can think of nothing but as a believer, than wow, what an evil person. What an evil act. So again, God, damn evil.”

Our first taste of the new record came in late February with the release of the lyric concept video of the track “Take It To The Cross”. Aside from the chorus we were not expecting – the song had a great and powerful message. We were never meant to carry the weight of the world on our shoulders, and through Christ, we can lay those things at the foot of the Cross and live without the fear that the evil of the world would like to lay on us.  The song reminds us that God is the only answer and to get to the Lord, Jesus is indeed the only way (John 14:6).  Musically the song is everything we have come to expect from STRYPER; heavy crunchy guitar riffs along with some impressive guitar solos from the Sweet/Fox combo.

“Take It To The Cross” is followed by the single “Sorry”, a song about a volatile relationship and the wake of destruction it leaves behind. “Sorry” was also accompanied by the release of a music video, where we see the band rocking out in the middle of the salt flats of the desert. This is also the first song in which we hear the thumping and melodic bass lines of new bassist in former Firehouse co-founder Perry Richardson.

“Lost” is probably one of my favorite cuts from the new record. Musically it carries many of the same elements we have heard on past records from STRYPER, but then you get to the soaring and building chorus and it just takes on a whole new sound and dynamic. The message of the song really digs into the meaning of the record’s title, and the state of the world in which we have fallen into. It begs one to ponder how exactly did the world get to the state we’re in today. The simple answer is we’ve become lost. We have forgotten God and the liberal society wants nothing more than to make Him and His ways a memory buried in the wasteland.

Okay, so the title track. Aside from the controversial title, it’s really a rocking song. It’s fitting that “God Damn Evil” follows the track “Lost”, because the state of the world now and the prayer asking God to damn the evil as a result of us opening “the locks and letting the devil in”. The track’s chorus is not only a cry-out prayer, but almost a gander at just how bad things have gotten because of our complacency. And when I thought even harder about it, how has it gotten this bad? Christians can take an equal blame in that as well. Have we really stood up to the things that are tearing us apart? Standing up for what we believe in and not fearing the repercussions and the persecutions that Jesus told us we would endure. Remember what John 15:18 says? “If the world hates you, remember it hated Me first”

Psalm 139:14 says “I praise you because I am fearfully and wonderfully made; your works are wonderful, I know that full well.” That’s what I believe the message of “Beautiful” is. I think we have all dealt with doubt in our lives, whether it be our looks, our abilities or even our usefulness or purpose in God’s eyes. For the one who thinks they are of no value to people, remember that your Heavenly Father had a great purpose when He created you and created you the way you are for a reason. You are beautiful and you mean something to Him.

“Can’t Live Without Your Love” is the ballad of the album and could really be aimed at the woman in anyone’s life.  The Lord created us and desires us to seek Him in everything in our lives, but He also knew that man would need a companion and couldn’t go life alone, so He created the woman. I know personally, I would not be even half the man I am without my wife, so this song is a testament and dedication of the admiration of the lovely ladies in our lives. Any man who answers honestly, knows this to be truth.

The album closes out with “The Devil Doesn’t Live Here”, which in my opinion is a rocking and worshipful proclamation of the words found in Joshua 24:15, which says “Choose you this day who you will serve…As for me and my house, we will serve the Lord”. The track not only has the strongest message of the record about one’s full devotion to Jesus in life, but musically it’s probably one of the hardest hitting tracks as well. When you are put in the situation where your faith in Christ is tested, and your loyalty questioned – what will your answer be?  Will you stand up for Jesus?  The song is a fitting proclamation to end the record with both lyrically and musically.

Overall, God Damn Evil delivers in all facets of everything we have come to expect from STRYPER and more.  Aside from the album title controversy, I think this set of songs are probably the strongest we have come to see from the band. The album boasts a message that I really think needs to be heard in today’s fallen world. Even musically, the album has managed to show that even over three decades into their storied career as a band, STRYPER still manages to stay relevant to today’s rock and metal scene with a fresh new approach with each record, but at the same time preserving the signature sound that the band is known for, only tweaking it slightly over the that time. That’s what I found most profound about God Damn Evil and also that it makes it perfectly clear that STRYPER has no plans of going anywhere, anytime soon.