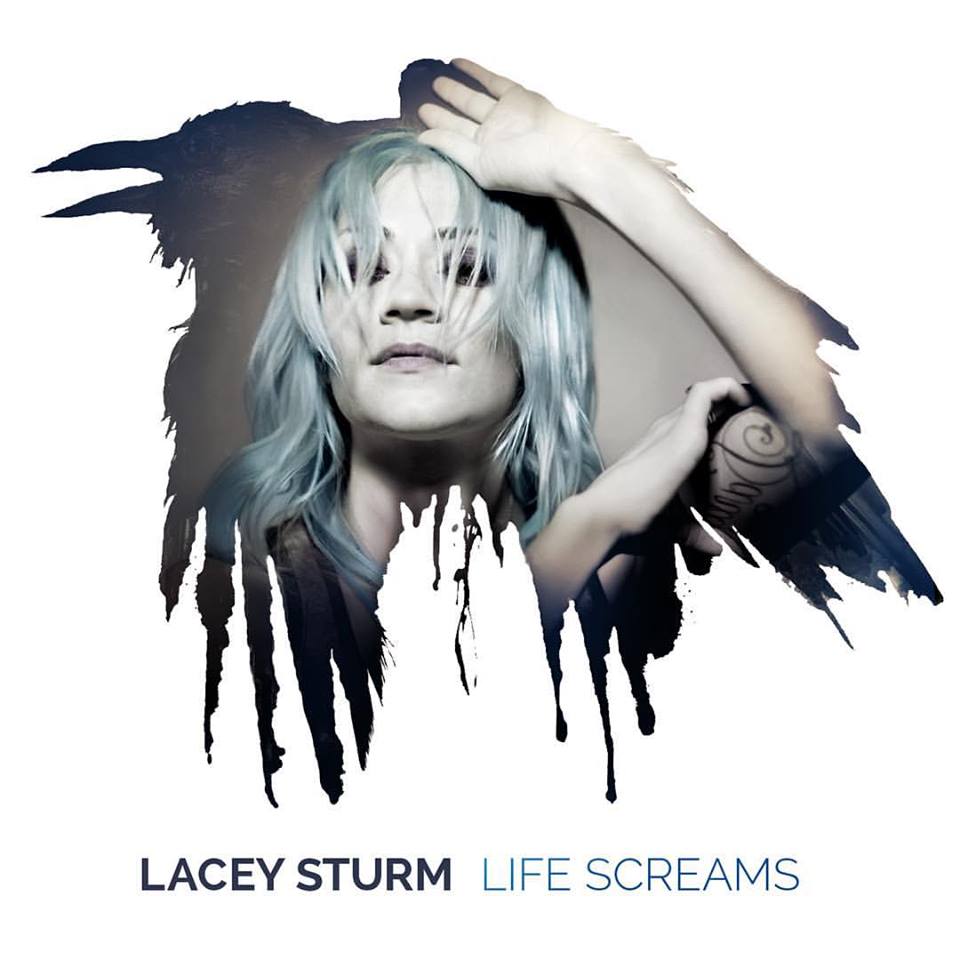 Headphones in, music filling my ears and the world begins to fade into the background. Finally, back into the groove of reviewing albums and picking apart the meaning of songs. And what better album to start with than one from none other than former Flyleaf vocalist Lacey Sturm? Her lyrics are crafted in such a graceful way to expose the brutal honesty of what this world is, but offers hope and a better life in her depictions of what having faith and who Jesus is means to her. She doesn’t shy away from the darkness of what sin really is, but instead shoves it out to face the light and explain how Jesus heals those who need Him. She is so beautifully open and raw, and intensely passionate about the messages she wants to share.

Not only is she talented lyrically, but the screams and high notes this girl is able to hit are astounding. Something about the quality of her voice makes a huge emotional and passionate statement that I have yet to find with any other artist. The album itself isn’t necessarily a “worship” album, since it deals with some of the darkness, pain, and struggles that many of us face, but there is a balance of glory giving, optimistic, messages for people to find hope in Jesus.

On top of the vocals and song meanings, LIFE SCREAMS delivers an impactful musical variety. Some songs feature eerie compositions made up of multiple different sounds, like the chaos and confusion of mocking laughter found in the song “I’m Not Laughing,” while some are just rock and roll in its purest form, like the guitar heavy, lyric screaming song “Impossible.” Each note has thought and precision behind it and fits perfectly in the entire scheme of each song. While every song features its own unique characteristics, there are a few that I would like to talk about individually.

The first song that stuck out to me was “The Soldier.” The song busts right out of the gates with some simple drums, but what really gets you is that low bass that you can feel plucking through your chest. Then Lacey’s vocals flutter in with a light acoustic beat that soon turns into slamming electric guitar beats and a crashing drum rhythm. The drastic change emphasizes the importance of the chorus’ message about standing your ground and being able to say “I’m not scared of you anymore,” to your enemies and the world in general. The song strongly encourages you to stand firm in your faith and not care about what others may think. It’s empowering and helps to strengthen your trust in God’s power and plan for you.

The song “Rot” really made me sit back and say to myself “whoa.” The song begins with the straining emotional yelling of a female’s desperate attempt to grasp at the remains of what she thought she knew love to be, overtop of a male’s lower and quieter voice hurling insults and lies. Quickly after, Lacey’s quivering voice breaks through the commotion with the slight sound of a continual cymbal crash. Slowly, the momentum of the other musical elements is added to the mix and feature a hasty silence between each slamming note to add to the dramatic emotion. This soon leads to Lacey growling passionate lyrics about the gilded world we live in. Throughout the song, the lyrics continuously cry out “Oh God, save my soul.” The song emphasizes the ugliness of the world and how true beauty and love are found in the grace and love of God. But Lacey is quick to exclaim, “deliverance is [ours] from all this beauty that will rot.” Hands down, one of my favorite songs Lacey has ever released. The message is so packed full of layers and layers of ideas that can be broken down and examined differently with each individual. Not to mention, the concept of being in a love you thought was real to find out it was a lie, is a theme seen in everyday lives quite often nowadays. I believe this song demonstrates musical and lyrical genius at its finest.

The passion and musical super ability continues right into the next track “You’re Not Alone.” The song begins with these machine noises that resemble a heart monitor and breathing machine paired with a slow incorporation of instruments that match the tune of the machine, which creates a stellar introduction to such an impactful song. Lacey’s tender and shaking vocals, arranged in a uniform tempo to add another layer of passion and emotion, are soon infused. The message of the song is simple, yet so important; the fact that you are never, ever alone because “His love will never leave, truth will not forsake.” As the amount of people with depression and anxiety rises, I think this song will be very impactful for many people who are struggling with the aspect of loneliness in these diseases.

A few songs later, you get to the title track “Life Screams,” that calms you down with a faint piano tune and beautifully soft vocals. I believe the song is sort of an illustration of how our “life screams” out for more than what this world provides for us. We can pretend to be satisfied and happy with our circumstances, but we all yearn for something more than just the ordinariness of this life on earth. The lyrics “you will live forever” eludes to there being more to this life and that we will live forever in Heaven with God and His people.

The album wraps up with a few softer tracks including a love song, “Faith”, an amped up cover of The Police’s mainstream hit “Roxanne”, and a lighter song about being a friend to those in need, “Run To You”.

The transparent personality of Lacey Sturm and her life experiences have been artfully crafted and included throughout the entire LIFE SCREAMS album, which makes her music honest and real. She isn’t afraid to talk about the hard times she’s faced or the hope and new life she has found in God and His love for us.

These emotionally relatable songs sung with such heart-wrenching passion, accompanied by a variance of powerful guitar riffs, slamming drum beats, and light string melodies, complete with an emotional dialogue interlude, create one amazing first solo record from Lacey Sturm, and one that I strongly recommend that you add to your collection.